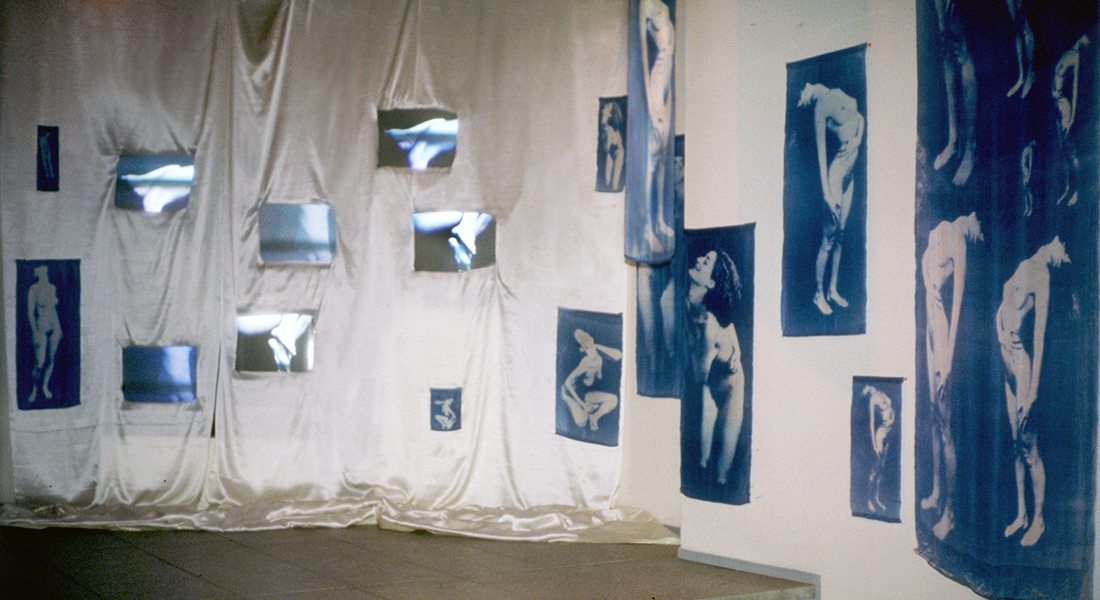 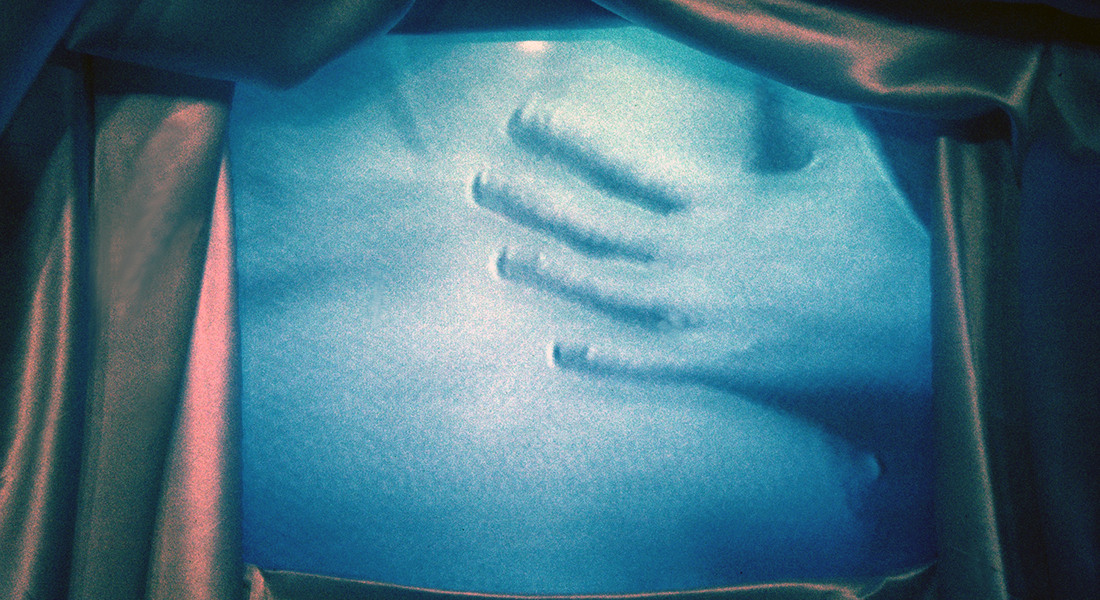 It is a story about viewing and being viewed, about exposure and isolation, about transparency and solidity, about love and longing, about communication, about genders, about beauty, about androgenic dreams and about myself – as always.

This was my first major solo exhibition in Norway. It has taken me two years to make it. It was a video-, photo- and sculpture-installation presented as a whole and consisting of many different elements: a number of big ceramic sculptures with photographic images of houses, windows and doors; series of 4m long silk panels with images of two young naked bodies, one male and one female; and a video-film taken of the same models in slow motion and sent on 14 TV-monitors (two small ones mounted into ceramic sculptures looking like a film rolling behind the curtains of a window). The first version of this exhibition (in a different sett) has been first shown at AVE-87 video-festival in Arnhem, Holland.

”Blue and Fireproof” has been presented as a major work for my MFA degree at the ceramic department of National College of Art and Design in Oslo. I was the first person to take a MFA at that school, the master degree program has been newly established and I was the very first to make and show my work in that connection. There has been an evaluation group consisting of five well-established men representing expertise in different fields of art, from video to ceramics. They have used about ten minutes to evaluate my project and it has been banned. I have nearly failed, they gave me the lowest grade they could, but they did not dare to fail me completely, so I have been given the MFA degree (which was a second one for me, I had one from Bezalel academy of art in Jerusalem from before, and I have been an academy lecturer for 6 years prior to this). Later I have received a lot of positive response everywhere else in the world, when I showed the documentation of this work. The head of the ceramic department turned furious with me and my non-obedient behavior. He said: ”I am going to make you eat garbage in this country! I will personally take care to make you starve.” Which he indeed nearly succeeded at. I have been excluded from all fellow exhibitions and presentations ever after.

I have really been working hard on this project. I am an extremely efficient person at everything I am doing. I have noticed that I am capable of doing at least twice as much as other people in a given period of time. I have been working as much as 10 to 12 hours a day everyday without a brake for two years and I have made a lot of things. Even though I have shown only about a half of the production at that exhibition, it looked like a lot. Everybody told me later that it was hard to believe that it all has been made by one person. So they either turned jealous or decided that when one can do so much, one can probably not be able to be good at all of it. So they had to slaughter me in order to protect their own honor both as men and as artists.

I have newly heard a speech by a very honorable museum director about a young talented photographer. He said that Norwegian artists want so often to put their whole life story into one work. What he liked about this young star was his laconic expression: there was just one short message in his work and that message one could understand.

I am certainly not laconic in any of the languages I speak, and I do speak many different ones.

I do not care if one can understand what I am producing or not. I am certainly not laconic or simplified in my expression. I use my whole soul and intelligence to produce my work and I expect a viewer to make an effort at least in order to understand. I believe in layers and levels. I believe that each work of art has to have several reference levels, so that everyone who is experiencing the work can find his or her own references. I believe that only by using one´s own life and personal experience an artist can make his public to read the work on a level appropriate for each single person. Each single viewer should and would read the work differently, based on his or her own life and personal experience.

Maybe like my favorite poet Marina Tzvetaeva I can say that my work, like precious wine will get ripe and most appreciated later.

Or as a friend I admire has written: ”If you are not ahead of your own time, your time will never come!”

About Being Blue >>
(Pdf, opens in new window)

About Blue and Fireproof >>
(Pdf, opens in new window)

An installation under the AVE-videofestival in Arnhem, Holland. Series of portraits and nudes, cyanotype on paper, cotton and silk. Sometimes on coloured paper or textile, sometimes toned or hand coloured. Still pictures in combination with slow motion pictures in the video. TV-monitors packed in silk with color light projections.

Being blue is a sad story about longing and loving, about loneliness and suffering. This is my first work after moving to Norway. I did not have a kiln or a studio, so I could not make cyanotype on ceramics as I used to do before. It was fun to try something new. Nearly nothing of this work has been exhibited, aside from the installations in Arnhem and Oslo. There I have only used the biggest prints. Much of this work is still buried in the drawers and is to be discovered after my death. I worked just for myself, for my own satisfaction and learning. It had never occurred to me that this work could exist as individual pieces. I used old negatives of friends and lovers and I photographed different models, which were posing under my instruction. It has been a discovery of something new inside me. It was not easy to show that work around. Norway has the most conservative art scene I have ever seen, so everything I did have always been against the rules: a ceramist making photography and video! They did all what they could to crush me, to stop me, to discourage me. Art mob in Norway has offered me to enter its elite circles, but I have just walked away without even thanking for that kind offer. One of them told me right in the face, that he would do his best to make me starve in this country. It has cost me bloody wounds in my soul and body to survive as an artist and as an individual in this country. I sometimes think why I stayed? Maybe because of my son, maybe because I could not even think of another immigration, but most probably because I had a few true friends around me here. Those few people were worth all the other suffering. Those were the people I photographed.