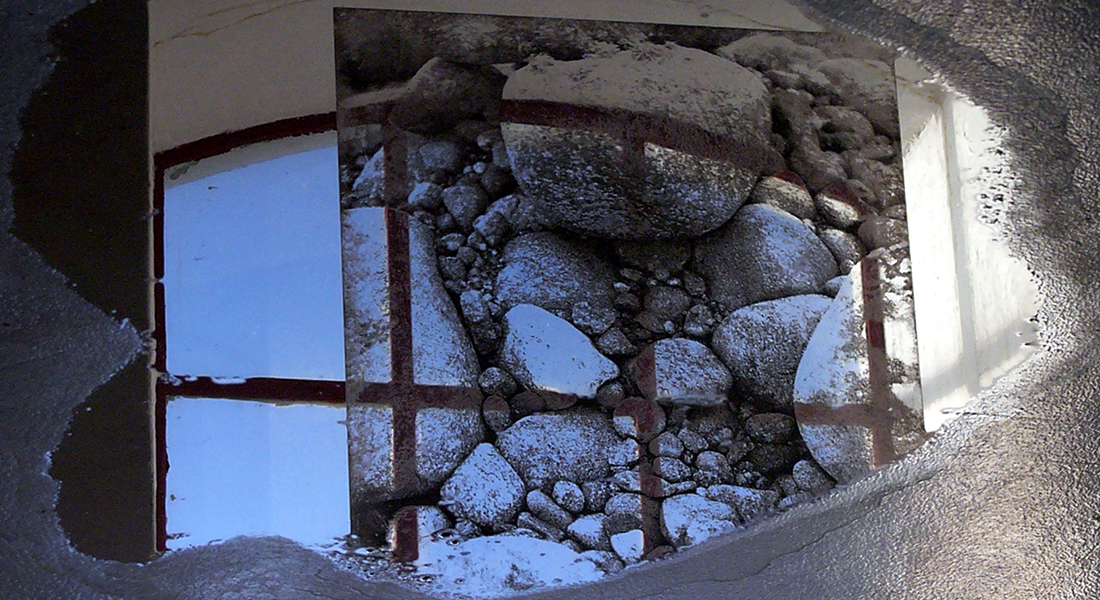 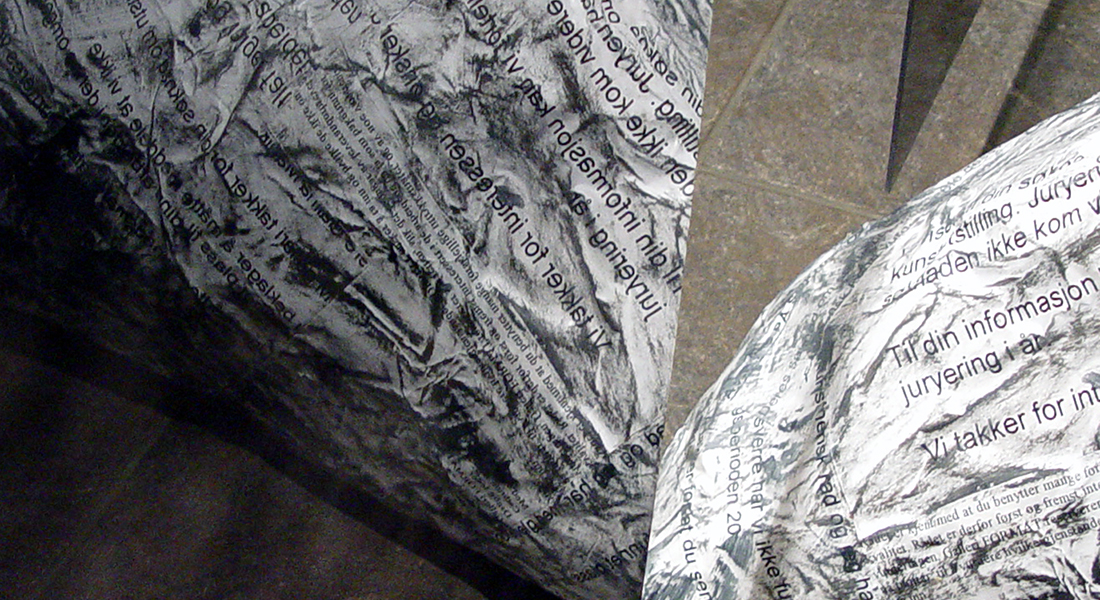 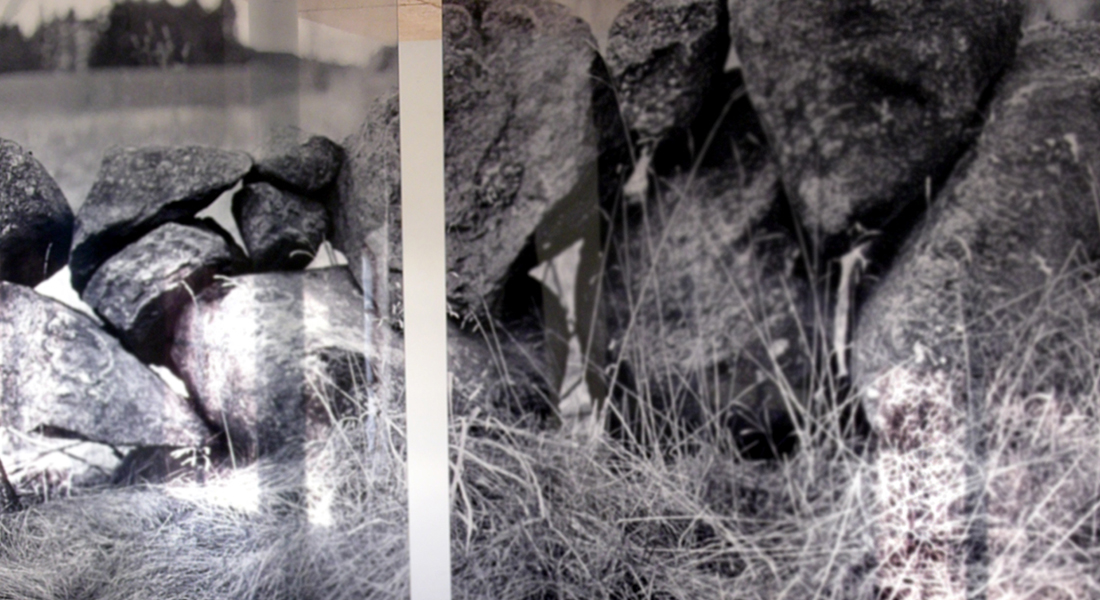 “Looking in, out and through “, an installation at Haa gallery on the west coast of Norway

This project is about making stones and fences transparent in both physical and metaphorical ways. Big photographs on plexiglass are hanging in the middle of the room, along the walls and in the windows are hanging close ups of groups of stones printed on plexiglass. These pictures send shadows and projections all around the room. On the loft there is running a video projected onto transparent textiles hanging in many layers. Words and their semantic meanings are used both directly and allegorically.
This project is a result of a long planning process. Usually I worked with new subjects and new techniques each time I started a new project. This time I wanted to start from something that I consider to be typical for my work and make a variation of the same subjects as identity, transparency, and language. I hope that by repeating myself I can make myself a little easier to understand.
There are two types of prints, photographic prints on film mounted on plexiglass and silkscreened motives of stones mounted in the windows. When one looks through these transparent pictures one can see the real motives outside the building. When the sun is shining through them it makes projections on the floor and the walls of the room, which are a part of the whole.
Visitors are coming to be a part of the installation as they move through the new landscape.
Words and the double meanings of the words are playing an important role in creating an atmosphere. History is transparent at that historic place, where I make myself present.
It is a long story hidden behind a few words. I just wanted to create the surroundings for a story, which could be different from person to person and from time to time. It is like a travel in space and time; it is like a dream that awakes some associations and memories.
I show the public the same landscape that they have just experienced on their way to the exhibition space, but it is still not the same. It is my interpretation of the story, my presence in that particular cultural setting, where perhaps I am not welcome.

“Walls”, an exhibition at Photographers House gallery in Oslo, Norway

This installation was number 2 in series of exhibitions and projects that deal with the subject of walls and borders in both direct and metaphoric way.

The first one was presented at Haa Gamle Prestegaard, a beautiful gallery on the west coast of Norway where they build so many stonewalls and fences.

From my earlier experiences I have learned that it is not a bad idea to show the same material in a new setting and make a variation on the same subject. I used to make video documentation of my first installation and use it as a part of the next one. I always make things for a specific space.

I wanted to try a slightly different approach this time. One can make art from anything and about everything. So I decided to use the title as a gathering moment for this group of projects. I did not know myself at the time, how long it would last, for how long I can be interested in and preoccupied with the same subject. Originally I had in mind at least three more other walls: the big one from China, Cremlin from Moscow and The wiping wall from Jerusalem. But it was very difficult to finance these ambitious ideas, so I kept receiving refusals for the most of my applications for financial support. Except for one from the Foundation of professional photographers, who run this gallery, Fotografiens Hus.

This was the reason why I made this installation. Refusals are the main theme for this exhibition. Norwegian walls.

Before this I worked with new subjects and new materials and techniques all the time. That is not a usual thing in Norway. Most artists keep digging one and the same thing through their entire life, improving themselves, making some very small changes, polishing their techniques and walking in tiny steps towards the perfection. Therefore my working methods and ways of artistic approach and progression are neither recognized nor understood here. That is the reason for all the refusals, I guess.

I wanted to repeat myself, to show the same pictures twice in order to show the change of perception. By adding a new element, I managed to change the concept and the impression of the work completely.

At Haa these same pictures looked innocent and beautiful, relating to the landscape outside, the light, the room, the public in between the pictures and the reflections.

At this exhibition I gave an interpretation to the stones. I have built a real wall of papier-mâché stones, which reflected in the photographs of the real stones from Haa and suggested a meaning that has not been there before. The texture on the stones was made by words and sentences from different letters that I have received in the run of 2004, letters of refusal. At the time we were receiving these letters on paper, so I printed them out and made them into a mess, which is what every one feels, I guess, when one gets upset and angry.

These letters were an incredible material in themselves, the way they are formulated and written, I keep collecting them and hope to make a project one day that will be a homage to Boltansky. I have seen an exhibition by Christian Boltansky in London once, after he already turned famous and well-established. He showed the letters of refusals from different institutions from the times when he has been unknown, like all of us, the others.

Naturally, the walls symbolize exclusion, segregation and discrimination. They can be tall and hard to rise, or they can be invisible, transparent, but still isolating and dividing. In this case I tried to show the walls around me as an artist working in Norway. The paper walls I placed in the exhibition room were light and fragile, I managed to ignore them, and to survive behind them. I make a laugh of this obstacle, I am ignorant, arrogant and self certain.

The next time I am going to relate to more serious matters. One walks into the walls and talks to the walls all the time.

I want to talk by the walls by the way.