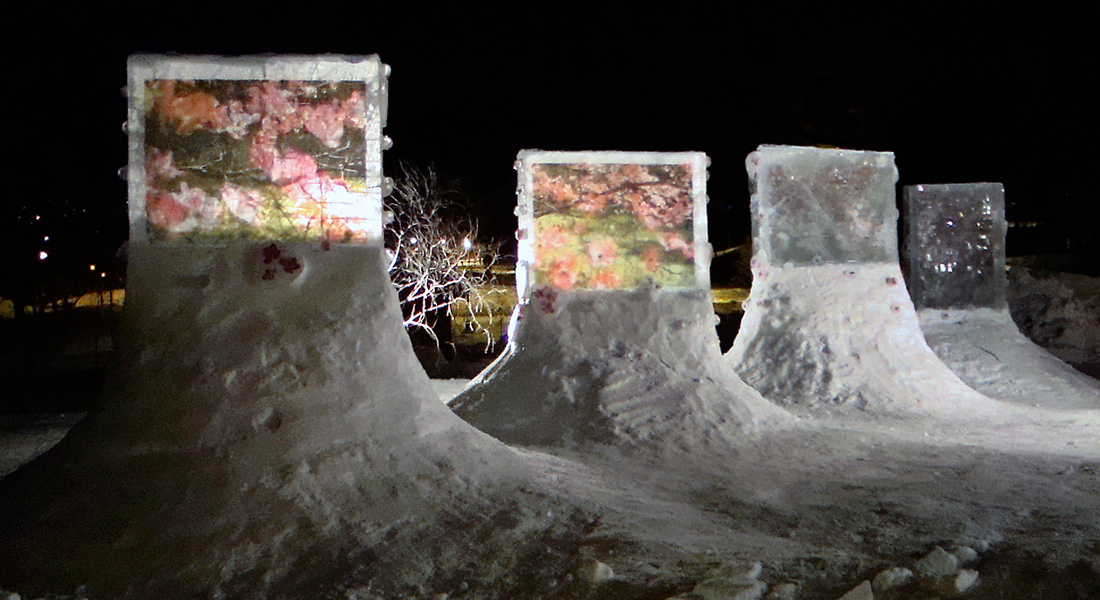 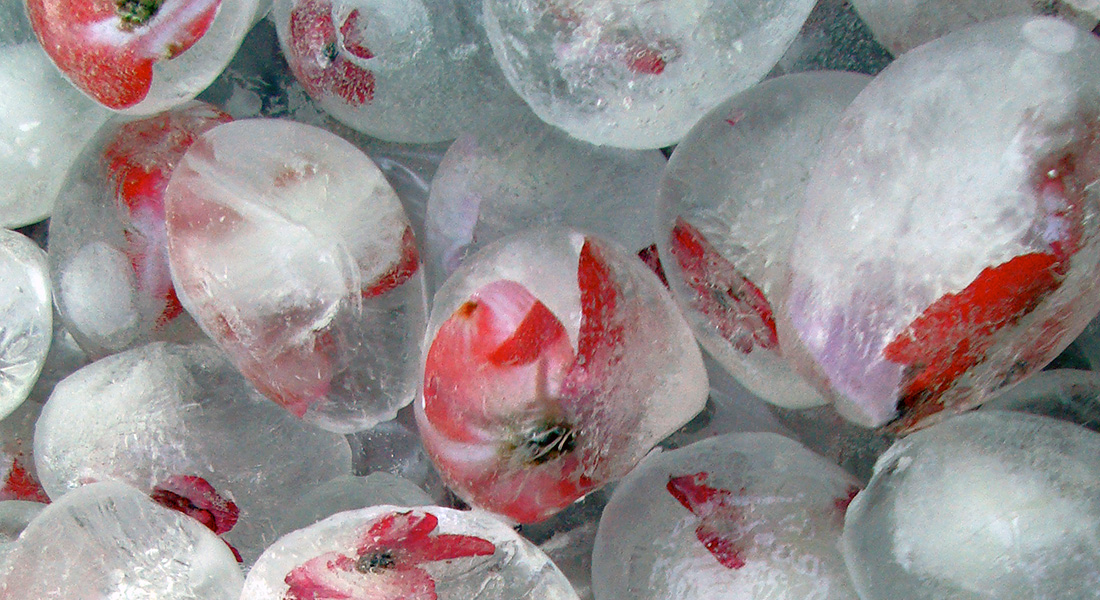 This project is a result of a long term experiments with photography applications on ice.

I have been working with transparent photographs on glass, plexiglass, different plastics and semitransparent materials like silk and thin cotton since 1974. I got facinated by the effects and the results after my MFA at the art academy in Jerusalem, which focused on application of photographs on ceramics. The transgression towards glass was a short way, as glass is so close by it´s physical and chemical properties t ceramic materials, only it has to be fired at lower temperatures and it is transparent.

The techniques used for application of photographs on ceramics and glass were both complex and forgotten. In the run of all those years since 1974 I have been developing and researching in this field I have achieved a certain expertise, which has received an international recognition. Mastering the techniques naturally leads to learning about the aesthetics and the forms that can be made using these techniques. The experience of working with such semitransparent materials could be transferred directly to working with ice. I have made several smaller projects of the type in China, Japan and in Russia. But I have never had an opportunity to create a project on a bigger scale.

The structure and organisation of the ice festival in Hovden with many artists workng together being provided with both sufficient finances and good technical support allowed me to create this project. I could not have made it without all the help from so many different people, from collegues to the school kids and the technical staff of the festival.

I wanted to create a contrast to the white surface of the space at the mountain resort of Hovden. I also had in mind some symbolic referrences accuring by bringing something foreign and not naturally belonging to this area, this season and these temperatures. I felt this project could be a sort of symbolic selfportrait, me in a foreign landscape.

Big digital photographs were printed in vivid colors on film transparencies by a photographic printer.

The huge plates of ice were cut out of the river nearby by a team of the experienced artists and dragged out of the water with help of a team of school students. Each plate of ice had to be first cut out vertically, turned on the side in the water and splitted in the middle horisontally, as only the bottom part of the river ice is transparent. The natural ice had it´s fantastic qualities, as there were rests of grass and even small fishes frozen into it. I have got eight big plates that later got glued together into four sculptures with the photographs placed in the middle between the two plates, so the pictures could be seen from both sides.

The bases for these sculptures were made out of snow in order to elevate the forms from the ground and make them more visible from a distance. Sun light during the day gave the most beautifull effects, but the sculptures were lit from both sides with lamps during the night also.

I have chosen the images of blooming trees taken from different perspectives and different distance, so the installation looked like as if one was walking into these images, getting closer or father, while walking by. Thick layers of semitransparent ice have created illusions of volume, the sculptures changed depending of the angle and distance of view, they have thrown shadows on the ground, which moved along with the sun.

Motives stood in a strong contrast to the surroundings telling a story that had many layers of interpretation.

Article at the blog of Fabiano Busdraghi
(opens in new window)

Ice festival at Hovden, Norway. An installation of four big sculptures made out of layered ice blocks with photographs on film transparencies placed in the middle. Motives of colorful blooming trees foreign to the location and the season.

Ole Morten Rokvam was the leader and the organizer of this festival along with a great team of many other people. I could not have made this project without them.